The Panasonic Arc5 is the best alternative to either the Braun Series 7 or Series 9. It offers the closest shave of any electric shaver we have reviewed and performs great in either wet or dry conditions. The Braun shavers may be slightly more comfortable, but they can’t deliver a closer shave than the Arc5.

Despite not having the same name recognition as Braun or Norelco, Panasonic has been delivering excellent shavers for years and the Arc5 is no exception. Building on the great performance of the Arc3 and Arc4, the Arc5 uses five cutting elements on the shaving head to deliver an exceptionally close and fast shave.

Unlike the sleek and modern designs that European competitors put out, Panasonic’s industrial design appears to be focused on maximizing shaving performance. The Arc5 has the largest shaving head of any foil shaver but still manages to feel balanced while holding the shaver in the hand.

Updated Models In 2019 Pansonic released new models of the Arc5. At this time you can still find both the older (ES-LV65-S and ES-LV95-S) and newer (ES-LV67-K and ES-LV97-K) models being sold at many stores.

Like most other electric shavers on the market, the Panasonic Arc5 offers a dizzying amount of different models under the Arc5 umbrella. Fortunately, the shaving performance is identical between the models with the changes being limited to features, appearance and accessories.

The newest models (ES-LV67-K and ES-LV97-K) feature a very nice matte finish which is closer to a dark blue/gray than black. The travel lock and battery LED indicator have changed slightly but still provide the same functionality regardless of model.

Despite the changes in appearance, the newest models use the same shaving head as the older models generation and will provide the same shaving performance. Because the performance is identical and the features are mostly the same, we recommend choosing the Arc5 model that offers the best value.

The shaving performance of the Arc5 can be described in two words, fast and close. The shave on the Arc5 manages to be slightly closer than the shave you can get with the Braun Series 9 and the large shaving head and faster speed allow it to cut through stubble even faster.

The Arc5 shaving head moves back to front, side to side, and the cutting elements can move up and down. We found that this additional flexibility makes shaving around the neck and jawline quicker than models that only flex front to back. You can also lock the shaving head in its position for areas where the flexibility makes it harder to shave.

The Arc5’s five cutting elements also are effective at cutting the different ways hair grows on your face. While the Arc3 and Arc4 both use a similar shaving head design, the extra cutting elements on the Arc5 allow for more hair to be cut with each pass.

Compared to the other Arc series shavers the amount of time it took to complete the shave was noticeable. What may take two passes with the Arc3 to cut against the grain of multiple growth patterns can be done with one pass with the Arc5.

One of the most impressive features of the Arc5 is its performance while using shaving cream or in the shower. Most shavers are capable of being used in wet or dry conditions but that usually results in a worse shave than shaving with a dry face.

If you are manually cleaning your shaver, use some soap and water to ensure you remove any residue before letting your shaver dry. 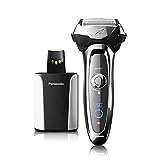 If there is one area that the Panasonic Arc5 falls short of compared to the Braun Series 9 or Series 7 it is on shaving comfort. We also found it took some adjustment coming from a Braun Series 9 to getting used to the larger shaving head and faster speed than the Arc5 runs at. It can feel somewhat rougher against the face, but that is probably because of the slightly closer cut vs the Braun shavers.

The Arc5 was not nearly as comfortable when shaving longer stubble than the Braun shavers and we would recommend the Series 9 if you shave your beard every 2-3 days. The Arc5 struggled to cut all of the hair in one pass and we felt some tugging when trying it against a 3-day beard.

The biggest changes between the newer Arc5 models and previous models are in features on the shavers. The newest models of the Arc5 uses an electronic travel lock vs the manual travel lock that was used on the ES-LV65-S & ES-LV95-S. Both are effective in preventing the shaver from being turned on by accident while traveling.

The ES-LV65-S & ES-LV95-S allowed you to choose between an automatic shaving speed which adjusts the speed based on the thickness of your beard or a full-speed mode.The newest models get rid of the manual mode in favor of an upgraded automatic speed-sensing mode which seems to adjust the speed quicker than in previous models.

Both the new and older models include a battery indicator letting you know how much battery is remaining. The older models also included a timer to show how long the shaver had been running, but the new models abandon that in favor of a simplified display.

Like many of the Braun shavers, a pop-up trimmer is built into the shaver. The Arc5 trimmer is better than most built-in trimmers and it is easier to get a clean finish on your sideburns.

Cleaning, Charging, and other accessories

We feel more comfortable recommending an Arc5 model without the cleaning station compared to Braun’s shavers for two reasons.

1. The Panasonic Arc5’s shaving head allows you to separate the cutting elements and the foils. This design makes it easier to manually clean the shaver compared to the Braun shaving heads which are all one unit. 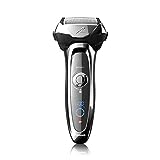 Unlike the cleaning cartridges used in Braun and Philips cleaning stations, the Panasonic models are refilled by mixing a detergent package with water. The detergent packs are readily available and don’t require as much space to store compared to cartridges.

The Arc5 cleaning station includes 3 different modes that you can select with a button on the station.

The Arc5 includes a faux leather travel case and a plastic shaving head protector. We were surprised Panasonic decided not to include a hard travel case like the ones included in the Braun Series 7 or Series 9 but it still protects the shaver adequately.

Panasonic Arc3 or Arc4
The other models of the Panasonic shaving family feature a similar design to the Arc5 at a lower price point. The shaving performance of the Arc3 and Arc4 is also great but the Arc5 shines for shaving quickness or using the shaver with shaving cream.

Braun Series 9
The closest competitor in price and shaving performance is the Braun Series 9. The Series 9 feels slightly more refined than the Arc5 and the included hard travel case is better for regular use. The shave the Series 9 provides is excellent but not quite as close as the Arc5.

Braun Series 7
The Braun Series 7 is our favorite shaver for the excellent shave it provides, the build quality, and the reasonable price it is usually available for. The Series 7 does not handle shaving with shaving cream nearly as well as the Arc5 and the shave is not as close.

The Panasonic Arc5 is perfect if you are looking for the fastest and closest shave. The five cutting elements are effective at cutting hairs falling in multiple directions and limit the number of passes you have to make over the same area.

Unfortunately, the excellent shaving performance comes with some tradeoffs. The shave takes some time to adjust to and is not as comfortable as the Braun Series 9 or Series 7. The large shaving head can be difficult to use around the mustache and sideburn areas and has a tendency for the foils to get warm during prolonged use.

The Panasonic Arc5 is the best alternative to either the Braun Series 7 or Series 9. It offers the closest shave of any electric shaver we have reviewed and performs great in either wet or dry conditions. The Braun shavers may be slightly more comfortable, but they can’t deliver a closer shave than the Arc5.